Proven system for trenchless pressure pipe rehabilitation for 20 years. Made in Bavaria, Germany.

Pressure pipe rehabilitation without major limitations for residents or traffic.

The ageing asbestos cement pipeline, which supplies the region around Bosa with drinking water, runs for six kilometres through a nature reserve without public access roads. The comprehensive execution of such a large-scale rehabilitation project exclusively with trenchless technology is so far the exception not only in Italy.

The dimension of this 3-million-euro project has a signal effect: Trenchless technologies for the rehabilitation of pressure pipelines are quite suitable and useful as a complete solution for comprehensive reconstruction projects. Their performance is by no means exhausted with the rehabilitation of individual, smaller critical points in the course of a pipeline, such as the crossing of a traffic route.

The ageing of the DN 500 water main led to frequent breaks with water leakages. The repairs repeatedly led to interruptions in the water supply to the municipality of Bosa with around 8,000 inhabitants and the surrounding region, which is also a tourist attraction. Since this is the only source of supply, the construction of a bypass was planned for the duration of the rehabilitation project.

The choice of the rehabilitation method and the implementation were also influenced by the nature of the pipe made of asbestos cement. In Italy, as in many countries, asbestos-cement pipes were used for the construction of water networks as of 1916. Especially between the 1950's and 1980's, their use continued steadily due to their "optimal" characteristics, unsuspected of the dangers of asbestos fibres. Its extension in Italy is estimated at about 125,000 kilometres with diameters ranging from 150 to 500 millimetres.

However, the decisive factor in the choice of the rehabilitation technology was ultimately the orography of the Temo river valley, through which the six kilometre long remediation section runs. The area between the start point, a bird watching area, and the end point at a dam is protected by numerous environmental regulations and has no public access roads.

Under these conditions, an open rehabilitation of the pipeline was impossible and ruled out from the start. But planning an intervention with trenchless technologies was also extremely difficult and quite daring. It took the high degree of specialisation and close cooperation of Benassi Srl and the manufacturer Rädlinger primus line GmbH for a smooth and high-quality execution of the project.

The outer layer, which protects the inner aramid core during the installation process, is made of abrasion-resistant polyethylene (PE). The aramid fabric absorbs the tensile force during pull-in and the entire operating pressure. The inner layer is adapted to the transported medium and, in the case of drinking water, is made of polyethylene suitable for drinking water. With the flexible high-pressure liner from Rädlinger primus line GmbH, pull-in lengths of up to 2,500 metres with several bends in one piece as well as a nominal pressure of up to PN 40 can be realised.

The connectors for medium pressure pipes consist of an inner profile core and an outer sleeve. During installation, a two-component resin is injected through a valve located on the outer sleeve, which presses the pipe into the shape of the inner core. After the resin has cured, the joint is permanent and has a high strength.

Access to the pipeline was provided via several shafts with valves and fittings along the route, so that even selective excavations for foundation pits could be completely avoided. The intrusion and impact on the pipeline and the surrounding area could thus be reduced to a minimum.

The precise organisation of the intervention phases ensured optimum execution of the work and minimised pipeline downtime. The project was divided into only three construction phases, mainly enabled by the special and efficient bypass solution, also realised with Primus Line® technology.

Each of the three construction phases took place in the following order:

For constructing the bypass under the difficult logistical working conditions, the high flexibility of the Primus Liner was of particular advantage. In each of the three construction phases, approximately two kilometre long sections of the pipeline were rehabilitated. For this purpose, 1,000 metres of the Primus Line medium pressure system DN 400 and 1,300 metres of the Primus Line medium pressure system DN 350 were available for the bypass. Using the Primus Line® system, it was possible to guarantee a hydraulic capacity that was higher than or equal to the minimum that would have been achieved with the network operator's original solution. This alternative solution would have provided for the laying and preparation of eleven bypasses with 1,000 metres of DN 300 pipes each.

For optimum practicability, Benassi's trenchless division decided to supply the bypass liner in nine sections with an average length of 255 metres, already equipped with flanged end connectors and wound on two metre wide transport reels each. For a speedy installation and to protect the material, a specially designed and manufactured hydraulic winding machine was used during installation, which was pulled along the line by an excavator.

After commissioning the bypass and draining the pipeline, the special fittings that were present in all intermediate manholes of the bypassed section were dismantled and the inlet and outlet pipes in the manholes were cut close to the concrete wall using suitable equipment.

Next, a video inspection was conducted from shaft to shaft to examine the pipe from the inside for damage or obstructions that would impede the Primus Liner from being pulled in.

The liner was then pulled into the pipe by means of a winch. In some cases, installation lengths of up to 1,000 metres were realised in one piece. For this purpose, the technicians from Benassi and the material manufacturer Primus Line carried out a feasibility test in advance for each pull-in section, taking into account the frictional forces that would arise. In doing so, an attempt was made to precisely determine the optimum ratio between the greatest possible care for the material and optimum utilisation of its performance capability and high tensile strength.

In view of the asbestos cement of which the old pipe is made, the underground work was carefully planned. Compared to the classic open construction method, the risk of spreading asbestos fibres is lower with trenchless rehabilitation technologies anyway. Nevertheless, appropriately trained personnel are needed to carry it out. In addition, Benassi provided a mobile cleaning system that cleaned the winch’s cable immediately after it exited the pipe. This reduced the risk of dispersing asbestos fibres by sliding the winch cable along the walls of the pipeline during insertion.

After the liner is pulled in, the specially designed connectors are used to reconnect the pipeline. For this project, Primus Line provided a custom solution for anchoring to the pit wall so that each connector could be inserted into the existing structures to save space. This allowed maintenance of the existing shafts and avoided additional excavation for the new construction.

After the Primus Line® system was installed, new valves and fittings, which were located in the finished shafts of the connections, were installed in all shafts of the rehabilitated section.

After the rehabilitated pipeline section was put back into operation, the bypass was drained and finally rolled up for the next re-laying of the subsequent section of pipeline to be rehabilitated.

An initial variant study considering different trenchless solutions such as sliplining with HDPE, CIPP and Primus Line® showed significant technical and economic advantages. while at the same time reducing the installation risks. In addition, the challenging site conditions due to the difficult-to-access terrain made open trench construction much more expensive and time-consuming, which made the renovation with Primus Line® the preferred solution.

"Only the extraordinary application possibilities of the Primus Line® technology made it economically possible to carry out this otherwise extremely costly and impractical maintenance work," concludes Project Manager Matteo Lusuardi from Benassi. 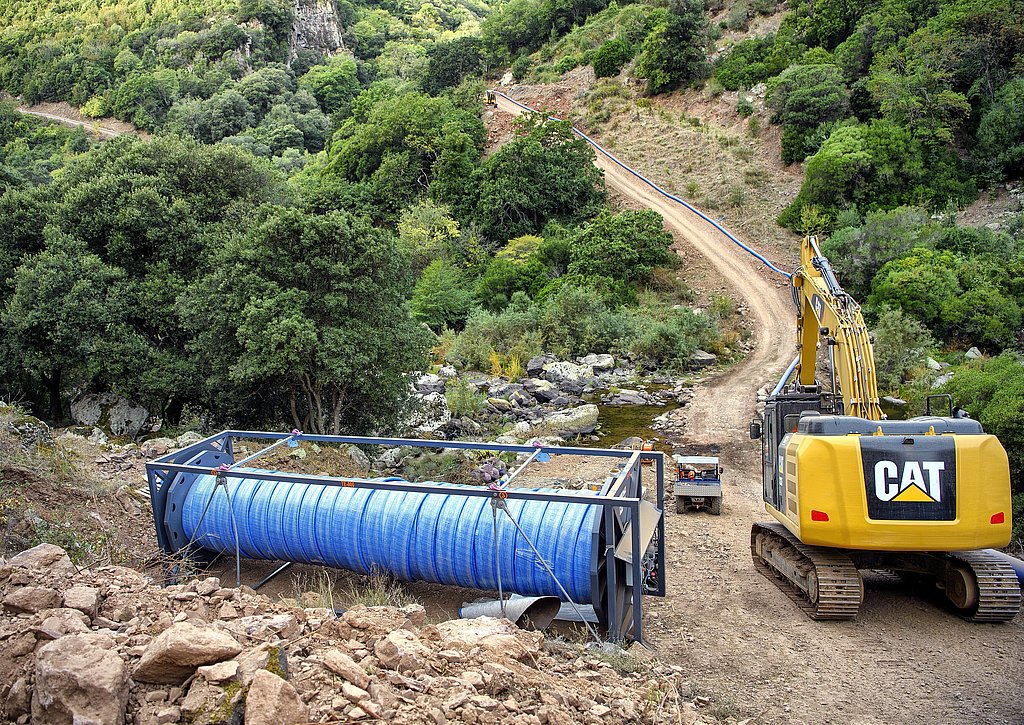 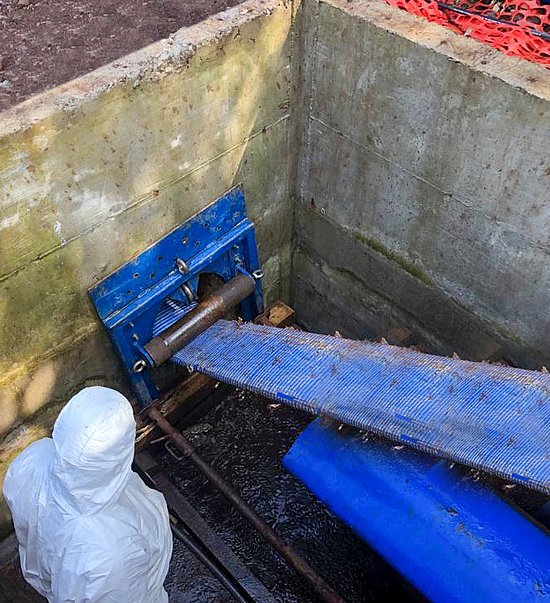 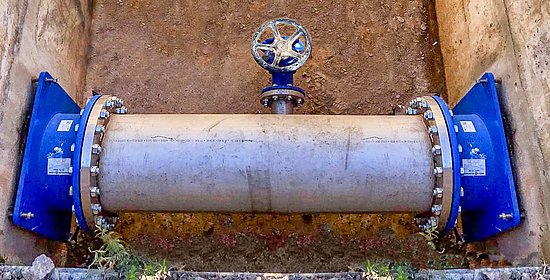 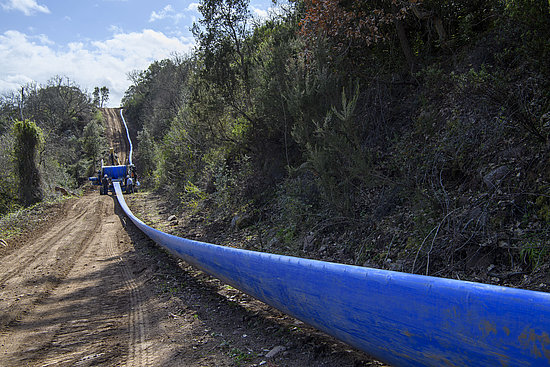 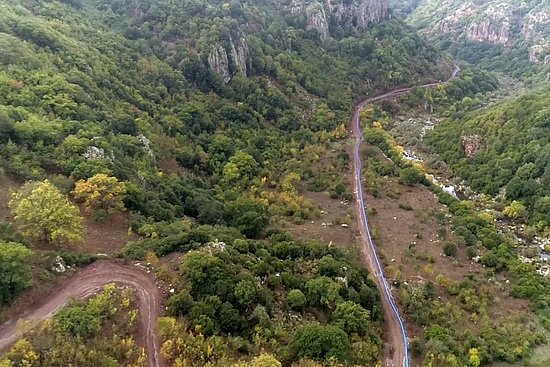